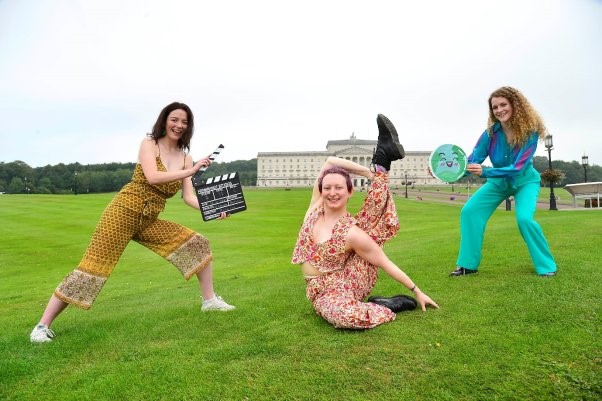 Co-operation Ireland and British Council team up for climate change

THREE Northern Ireland women are on a mission to raise awareness about the climate crisis.

Jacinta Hamley, Rebecca-Jane McMonagle and Jemma McClelland have each developed activism projects ahead of COP26 in November, having taken part in social action training through the British Council and Co-operation Ireland’s Future Leaders Programme.

Through the British Council’s Active Citizens programme, the trio participated in a number of workshops with trained facilitators where they developed their confidence, networking skills and project management skills to develop their own social action projects – leading to the formation of a climate festival, film project and cabaret show.

Jacinta (24), who grew up near Crossgar in Co Down, has organised Climate Craic, Northern Ireland’s first-ever climate festival, which takes place this Sunday, September 19. Held in the grounds of the Stormont Estate, the event, which is open to all ages, will feature an array of activities including live entertainment, eco-friendly workshops, guest speakers and displays from local artists – all in the name of helping more people learn about and celebrate climate activism.

Speaking ahead of the festival, she said: “When we were taking part in the Active Citizens training, I thought a climate festival would be amazing, but probably too much work – but somehow I’ve done it anyway! The idea came from everyone being so disconnected during Covid-19 and being online. There didn’t seem to be much space for building communities and connections and it just felt like something we all need right now – being physically together, outside.

“I feel really strongly that this festival should celebrate the joyous aspects of climate action and environmental engagement – and that it’s not all doom or gloom. It’s a wonderful thing to be part of – bringing people together who might not usually feel connected enough to engage in something as big as a march of protest. This is more of a fun day out for people to enjoy.”

Jacinta is no stranger to climate action having sailed to COP25 in Chile in 2019 and hopes to make Climate Craic an annual event. She said: “After this, I would love to be able to attend COP26 in Glasgow in some capacity and then think of what’s next for the festival – hopefully something bigger and better – but with more planning and funding. I would encourage everyone to come along this Sunday – it’s just a chance to have fun, learn a bit and be inspired by others.”

Filming all the action at Stormont will be Rebecca-Jane and her Climate Action on Film project team – who are out to capture creative climate action across Ireland for a documentary project.

Rebecca-Jane said: “There’s so much happening in Ireland right now ahead of COP26, that I felt it would be something really interesting to film. Not only is there Climate Craic, but there’s also great work happening in grassroots organisations such as Fridays For Future in the North and Zero Waste in the North West, alongside big events like Dublin’s Science Week. These moments need to be capitalised on and showcased – especially creative action being undertaken by young people. It’s important to highlight the great work these groups are doing, while also letting young people know there’s various ways to get involved.”

The 23-year-old, who is originally from Derry/Londonderry, aims to create a 40-minute film project, ready to be showcased by summer 2022.

She continued: “I’ve been lucky enough to work with two amazingly talented Northern Ireland filmmakers on this project – Emmett Thornton, and Gaga G – and we aim to have this documentary showcased at festivals such as Foyle Film Festival, with our filming wrapped up by February next year, giving us a few months to edit.  This has been a fantastic experience for me having never done something like this before. The Active Citizens training has helped me get out and meet new people after lockdown, learn how to project management a big project, and most importantly, get back into activism.”

This is the first event organised by the Belfast performer, who is also fundraising for UKYCC (UK Youth Climate Coalition).

She said: “Through Active Citizens I was able to really think about my project as well as network and collaborate with new people like Rebecca Jane and Jacinta. My end goal with this is for audiences to learn something new and look at arts activism in a different way. One of the Burlesque performers will have her costume made from sustainable materials, there’s songs about climate action and even a drag performance with a focus on nature. It’s an incredible show which I can’t wait for people to see, and best of all, it’s for a great cause.”

Speaking about all three of the social action projects was Jonathan Stewart, Director, British Council Northern Ireland. He said: “We’re delighted to see these amazing projects come out of the Active Citizens training with Co-operation Ireland – which aimed to challenge young people to stretch their thinking and take action on the biggest issue facing our planet. What they have been able to achieve in such a short time is incredible, and we wish them all the best with their projects in the weeks ahead.

“This training is part of the British Council’s Climate Connection campaign, which draws on our expertise in education, the arts, cultural exchange, and the English language to help young people find innovative solutions to tackle the climate crisis.”

All three of the projects will be delivered as part of the Climate Coalition’s Great Green Week, a nationwide celebration of action and climate change.

The Climate Craic festival is free to attend – find out more: https://climatecraic.com/.

To book tickets for the Climate Cabaret, visit https://www.eventbrite.co.uk/e/climate-cabaret-tickets-162294614561. Tickets are priced on a donated basis.

The Active Citizens project is part of the British Council’s global programme, The Climate Connection, which brings young people around the world together in 2021 and beyond to meet the challenges of climate change ahead of COP26 Glasgow, Scotland, from 1 to 12 November. The project was delivered as part of Co-operation Ireland’s Future Leaders Programme, which aims to empower the next generation of young leaders and peacebuilders across the island of Ireland to make a positive contribution to the future development of their communities, and across communities.

Active Citizens continues the British Council’s work, building connection, understanding and trust between people in the UK and overseas through arts, education and English language teaching. To find out more about their work in Northern Ireland visit nireland.britishcouncil.org or follow on Twitter, Facebook or Instagram.