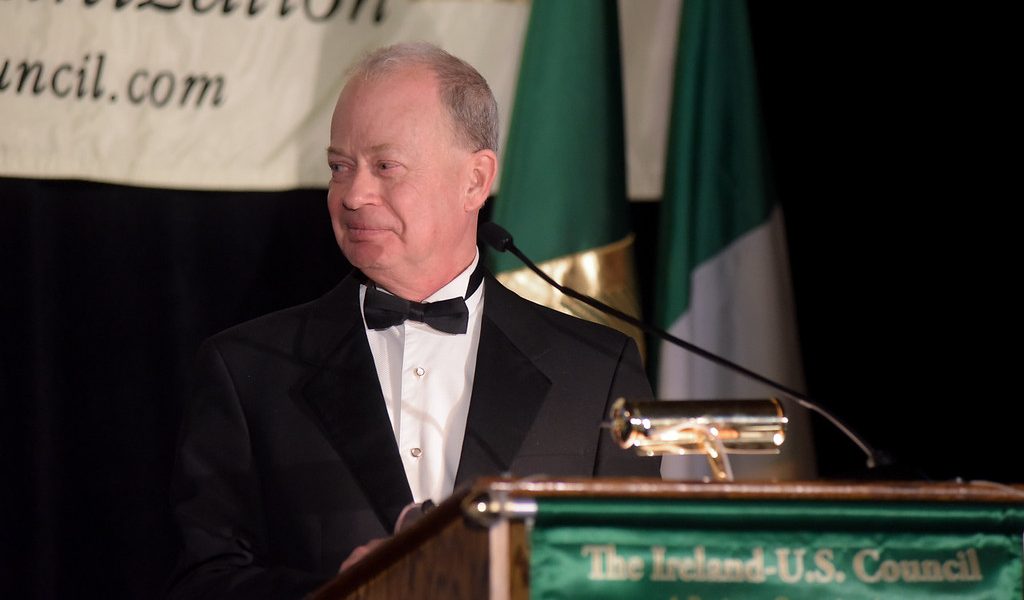 This obituary of our former USA CEO Norman Houston appeared in the Irish Times.

Norman Houston, the recently retired director of the Northern Ireland bureau in Washington DC has died suddenly and unexpectedly in Belfast.

Trusted and well respected on both sides of the Atlantic, Houston was a tireless and consummate diplomat whose mission was always to promote peace in his homeland. Washington is one of the few places in the world where Northern Ireland had its own diplomatic representation, separate to the British Embassy. Essentially, Houston was the de facto ambassador for Northern Ireland not only for the United States, but also for Canada.

For over 15 years, he saw it that Northern Ireland was at the centre of political and economic discussions in successive US administrations – bringing investment to Northern Ireland and opening doors for politicians and business leaders when they visited the United States.

He served as deputy director of the Northern Ireland bureau from 1998 to 2002 and then director from 2007- 2019 – periods which spanned the presidential administrations of Bill Clinton, George W Bush, Barack Obama and Donald Trump. Having the unique honour of being the longest serving British diplomat, he was awarded an OBE for his work in 2019. Later that year, the Ireland US Council awarded him the 2019 Cuchulainn prize for his outstanding achievements at a gala dinner in New York, which he attended with his daughter, Chloe.

Renowned for his excellent networking skills, Houston was an astute political observer who understood the nuances that shaped political allegiances. He kept his own political views very private and concentrated on drawing people together from all political persuasions.

In the crucial early days of the Northern Ireland peace process, he ensured Martin McGuinness and Ian Paisley presented a united face to all friends of Ireland in the United States. In December, 2007, Houston became the first Northern Ireland diplomat to escort the then Northern Assembly first minister Ian Paisley and the deputy first minister Martin McGuinness, into the Oval Office to meet with the then-president, George W Bush.

He said in an interview in 2017 that the meeting was due to be 15 minutes but Dr Paisley and president Bush got on so well the meeting was extended. “They took to one another immediately and no one could break them apart as they were laughing and chatting so much. I was getting daggers from the chief of staff but there was absolutely nothing I could do. We were there for an hour, foreign heads of state are lucky to get half of that time.”

Houston went on to facilitate similar meetings with former president Obama and then vice-president Joe Biden and secretary of state Hillary Clinton. And in a rare positive gesture to diplomats, former president Donald Trump name checked Norman Houston in his St Patrick’s Day remarks in March 2018.

Reminiscing about his experiences in Washington, Houston recalled attending Obama’s inauguration with his son, Connor. “I distinctly remember seeing members of the black community crying in the street and one old gentleman was wearing a T-shirt stating: ‘My President looks like me’. When I saw that man, who must have been freezing in the cold of a Washington winter, it touched a raw nerve.”

During his time in the United States, Houston travelled widely, speaking at gatherings in New York, Atlanta, California and also taking trips to Canada and South America. He was responsible for the first official visit to Brazil of the first minister and deputy minister for Northern Ireland in 2013.

Promoting connections between the Ulster Scots communities of North America and Northern Ireland was one example of the numerous ways he liaised with people. And in 2018, he marked the 50th anniversary of the Civil Rights Movement in Northern Ireland.

Deeply kind and generous, he spoke at Ireland Funds events in the US and personally looked out for the young Northern Irish people who visited America as part of the Washington Ireland Program. A dapper dresser and excellent story teller, he was great company and livened up many formal occasions with his mischievous sense of fun.

Originally for Larne, Co Antrim, Houston was proud of his family – which consisted of his mother and grandparents – and his working class roots. He maintained ties with his old school, Greenland Secondary School [now Larne High School]. He joined the civil service straight from school in 1975 at the height of the Troubles. He married in his early 30s while still in Belfast and his children, Chloe (1991) and Connor (1994) were born. The marriage didn’t last.

In an interview with the Belfast Telegraph in 2018, he said, “I suppose at the end of the day, I still see myself as a wee Larne man who had a solid upbringing based on a very strong moral code. I have had a wonderful career but the main lesson I’ve learned is never forget your roots.”

Houston retired from the Northern Ireland civil service in 2019. In early 2020, he worked briefly as the chief executive for North America of the peace-building charity, Co-operation Ireland, before returning to Northern Ireland in April. He recently bought an apartment in East Belfast and had just moved into it before his untimely death.

Norman Houston is survived by his children, Chloe and Connor, his cousin, Janice and aunt, Helen.