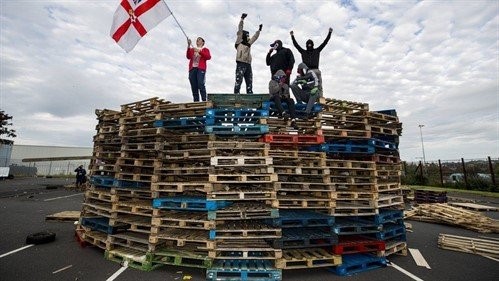 Back in July 2019 in the run up to the annual 12th of July celebrations, East Belfast hit the headlines as young people were pictured at the forefront of a standoff between police, government officials and loyalist communities. These groups of mainly young men received praise from within loyalism as “glorified defenders” of their community, giving them a sense of worth and connection in an environment where paramilitarism continues to impact daily life. For them, they were standing up for cultural expression in the form of 11th night bonfires.   However wider society viewed this ‘defence’ as an action that included violence and intimidation and an example of the influence of illegal paramilitary gangs.

Colin connected with our Young Advocates Programme (YAP) in the summer of 2019, immediately after this difficult summer period of tense standoffs and rioting in his local area.  Youth workers felt it would be beneficial for Colin to engage in Co-operation Ireland’s citywide youth programme. Colin’s life revolved around paramilitaries, bringing him into the criminal justice system and this had been a normal rhythm in his life, with no father figure in his life he was easily influenced and manipulated into a world of crime and bigotry.  This Lifestyle affected his educational attainment and future outlook like so many other young men from this working-class loyalist areas of East Belfast. With limited opportunities for growth due to generational social deprivation leading to unemployment and educational underachievement, leaving very little options for young men and driving them towards a life of crime and paramilitary involvement.

Although having a challenging life, he also looked for positive opportunities and he engaged with youth workers and the opportunity to connect with Co-operation Ireland. Colin however had never engaged in a cross-community programme and attending YAP was a challenging experience as he held quite extreme sectarian attitudes and wasn’t afraid to share them.   For most of his life Colin had never travelled further than Belfast City Centre and this new opportunity was daunting and challenging as this would push Colin and his peers well beyond their comfort zone.

Colin started the programme with a bang, taking the role of a dominant male and expressing a desire to gain the attention of everyone, through disruption.   However, his group remained adamant that they would never be travelling to other Catholic Republican areas of Belfast some less than 8 miles from their home area. The Co-operation Ireland staff, and peer young people played a significant role in creating a safe environment for Colin to be himself, taking a less dominant role as the programme developed. Patience of the staff created a consistent environment for Colin to understand his boundaries and consequences of his behaviour.

Over the course of the first few months Colin felt uneasy with his new extended peer group, he struggled to complete his qualifications and he felt exposed due to his inability to read or write.   Supported by his peers and the staff, Colin thankfully achieved his first qualification in his life, a huge milestone and turning point for his development throughout the remainder of the programme.   The vulnerability of his peers on the cross-community programme had an incredible impact on Colin. Significant moments that stand out were when a young person shared, he was gay after Colin had joked and criticised same sex couples. Another significant moment was when young people from West Belfast shared the importance of the Irish language and their desire to see a united Ireland. These incidents were new to Colin and took him by surprise, as he wasn’t used to a young person speaking with such honesty and authenticity. Colin commended these young people and was struck by the value these young people put on certain principles. Through the training programme over 7 months Colin was awarded 4 qualifications and an opportunity to work collaboratively, advocating on behalf of his peers about better mental health provision.  Along with with his fellow peers Colin created a sense of purpose and meaning that he had rarely experienced before. Colin has had an opportunity to gain many recognised qualifications and a much broader outlook on life and his experience at Co-operation Ireland has opened Colin’s mind to a brighter future where he feels connected and understood. Since the programme finished, Colin has managed to hold down a permanent position as a tradesman, while attending college. As everyone’s journey, there have been up and downs however his attitude to respecting those with different views has greatly improved.    Colin has not returned to the main bonfire area this year and has encouraged others from the area to remain away from trouble and connect with youth services, Co-operation Ireland and his local community.

Co-operation Ireland deliver over seventeen various youth leadership programmes across Northern Ireland, in communities that are still affected by intergenerational trauma due to the history of the conflict in Northern Ireland.   Young people today are continuing to pay the price of decades of death and destruction.   Co-operation Ireland are working with new generations of young people to build their capacity, to give them the opportunity to create a new vision for themselves and the future generations of young people that come behind them.   All of our youth programmes build social capital to ensure that each individual that takes part in any of Co-operation Ireland’s Youth Leadership programmes will each come away from our programmes having: