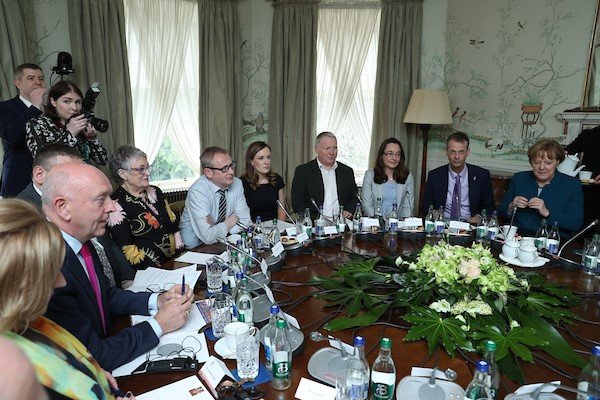 Co-operation Ireland CEO Peter Sheridan was in Dublin in April to moderate a meeting between German Chancellor Angela Merkel and Taoiseach Leo Varadkar with invited guests from communities living on the border.

Chancellor Merkel was in Ireland for talks with the Irish Government ahead of a planned EU Summit next week.

Speaking after the meeting, Peter Sheridan said the meeting gave ordinary people a chance to put forward their concerns about what would happen following Brexit.

“What is sometimes lost in high level negotiations is the impact decisions can have on ordinary people and their livelihoods because of the focus on technical issues of trade, so I was delighted to be asked to come along for the meeting with Chancellor Merkel and Taoiseach Varadkar with people from both traditions who live on either side of the border.

“They were able to put across their personal and lived experiences of the border during the meeting and Co-operation Ireland was happy to be able to assist these talks.”