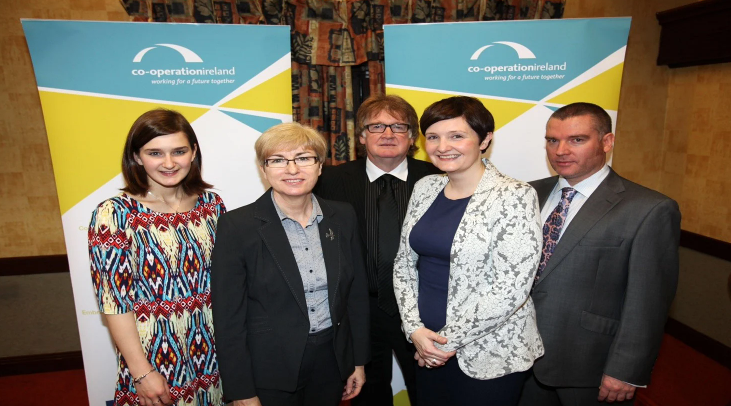 Since October 2012 Co-operation Ireland has led and facilitated the only EU funded peace and reconciliation project working directly with military/services’ families on the island of Ireland. The FACE Project has pioneered a developmental and practical stepping stones way of enabling these isolated, divided, and hidden populations to become integrated and constructively engaged for the first time as part of the Peace Programme.

Services’ families based at various locations throughout Northern Ireland have an important role to play in the communities in which they live. FACE was designed to help integrate these families with their respective neighbouring communities over a two and a half year period and remains a significant part of grassroots peacebuilding within our evolving peace process here.

The project has also built the capacity and confidence of women’s groups, communities and individuals to work together in addressing common issues and priorities.

Women participants were able to transform attitudes, perceptions and feelings of isolation, mistrust and ignorance. Over the period of the project FACE participants were able to overcome feelings of apprehension and were equipped to build meaningful friendships based on trust.The FACE team at Co-operation Ireland aided this process through facilitated workshops, residentials, training events, site visits and open space discussions as well as pioneering a ‘managed contact approach’.

FACE has been a significant, challenging and progressive peace building project. As the only developmental field of community engagement work with the services’ community and military camps here, this initiative has attracted much interest and support, including endorsements from 10 Downing Street, senior government officials, academia and military charities. It remains an important area of project work that is both sensitive and challenging as well as under developed within the peace programme.

It hosted an international conference at Titanic Belfast in September 2014, which highlighted many of the achievements of the project and provided a unique platform for interactions that would not have happened prior to the commencement of the project.